The Project consists of 24-floor buildings which is around 1,000 high quality apartment units. The project is expected to be completed by spring 2023, followed by handover. With the concept of “ Large-scale residence for the upper middle class customers who want to spend relaxing time with their families”, BECAMEX TOKYU is developing a building that has “a variety of common facilities” as well as the “elegant design”. Moreover, cloud Wi-Fi system provided by NTT e-Asia Corporation, a member of NTT Group, (mentioned below as “NTT e-Asia”) will be installed in the common facilities, adapting all types of working style. This is the very first apartment in Vietnam that provides a “co-working space” for the residents.

Binh Duong is the province with a population of 2.4 million people, adjacently situated north to Ho Chi Minh City which is the largest city in Vietnam. Binh Duong is one of the provinces which actively attracts foreign investment in Vietnam and is placed 3rd for its more than 4,000 foreign direct investment (FDI) projects, after Ho Chi Minh City and Ha Noi. As the factories by foreign companies increase, the population grew accordingly.

During 8 years from 2012, TOKYU is developing an urban project "TOKYU Garden City" in Binh Duong New City (total area of around 1,000ha) fusing the local’s culture and customs with their experience from their project "TOKYU Tama Garden City" in Japan. Until now, in addition to developing 4 residential projects, 2 commercial zones, attracting schools and medical facilities, constructing transport system via operating public bus routes since 2014, to make it a fully functional urban, BECAMEX TOKYU also hold several community events to bring the liveliness to the city. The company plans to operate more bus routes connecting with Ho Chi Minh City in the future, to further develop Binh Duong New City and promote the movement of people.

BECAMEX IDC CORPORATION in fields of Smart city realization in Binh Duong Province.
And as a joint business by subsidiaries of each, Vietnam Technology & Telecommunication JSC and NTT e-Asia , will provide various ICT services , in particular FTTH services and cloud Wi-Fi servives.

Both companies intend to use BECAMEX TOKYU’s 8 years of “high-quality construction and management” experience in Binh Duong and NTT Urban Development’s expertise in real estate development in many countries.

Perspective of The project:

About the joint venture

TOKYU has established many residential low-rise and high-rise housing, commercial facilities from 2012. Until 2014, a bus system was put into operation, contributed significantly to the using public transports of the residents. 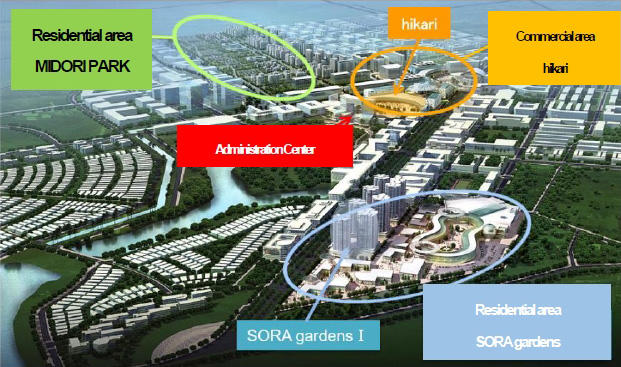